I’m attempting to use this website as a good place to lay down my thoughts.  Sometimes it’ll be something, sometimes not so much.

I think Facebook and all the other social media plates I keep spinning aren’t really the place to share the deeper things in my brain.

That being said, sometimes I don’t want to get that deep.  It’ll just be an update on a crazy week or simply letting you know what

So I’m going to try to keep this updated on a weekly basis and aim to do that on Sundays.

This might have been one of the craziest weeks in my life.  Not on a personal level but certainly on the level of “Holy Shit!  The Capitol

building just got breached by a bunch of troglodyte ass hats wearing hats supporting an ass.

I’m sure there are plenty of places for you to read up on that so I won’t go off.  All I will is that it was truly disgusting to me and I can

and his followers.  I get into it in a bit more depth on the most recent episode of my podcast “The Jacob Wayne Show”

a banjo.  I’m excited for ya’ll to see that one.  It was a commission I received from a good friend and it’s always such a creative treat to

get a commission like that rather than the usual pet portrait thing.  Don’t get me wrong I love having the Pet Portraits to fall back on and

they are fun once you get into the flow with them.  Over all though it can be a lot of pressure making sure a pet actually looks like the pet

all while maintaining your own distinct style.  When someone says, “Musical mushroom forest with a gnome playing Banjo, but you know…

Do whatever you want!” that’s just wonderful.  Clear parameters but so much room to play.

I’m also uploading all my Trump paintings to my print sites (Which are linked in my “Prints, Apparel & Swag” page on this site.)

hanging his demon form in their homes knowing he’s not in power anymore.

That being said, I wouldn’t be surprised if I don’t sell any of them.  I really enjoy the paintings but I wouldn’t say the bring me peace.

They tend to just make me chuckle in dark cynicism.  After January 20th I plan on never painting that creep again.  Let’s hope from here

on out I never think about him enough to feel the urge to spew his image out on to a canvas like I’m lancing a pus-filled cyst. 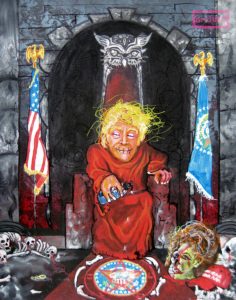 As far as music goes, Shockey is finishing up the guitar on two songs for the next GAMMA PAW e.p.

Then it’s on to mixing and mastering which shouldn’t take long at all and then it’ll be time.
We will unleash ‘The Hexxus EP” on all the streaming things and start jamming for a live performance video that we hope to put together

soon.  Then it’ll be getting back to work on the 3rd EP.  Hopefully by then it’ll be Summer or Fall and shows might start coming back.

Then we can get out and perform and get a live drummer going.

Somewhere in the middle of that I’ll be going back over the DEMO for Fa Koshka’s long awaited next album, “COVFEFE” and we’ll

start doing what we need to in order to finally get that recorded.

Until next week, ya’ll have a lovely time, go stream all the music (which you can find on the music page on this page as well linked right

to Spotify) and check out “The Jacob Wayne Show” on YouTube and on most podcast streaming services.