Well it was the last week of my yearly least favorite month, January.

RIP to Cloris Leachman, and if I forgot last week to Larry King.  Phil Spector?  Not so much, but thank you for the “Wall of Sound” thing.

Other than that it was a pretty straight forward week of work and wrapping up recording on GAMMA PAW’s second EP, “THE HEXXUS EP”

I’m super excited for all of you to hear this new set of songs.  It truly feels like the strangest and yet most well produced thing I’ve been

a part of.  Ironically enough it was all a home studio effort with my friend and bandmate Brandon Shockey.  Updates soon on a release date.

The only other thing is a few substantial print sales came through which is nice and many of them were of “Mittens”, so any of my profits

from that go directly to “Meals on Wheels” here in Fort Collins.  Here’s an image of “Mittens” on a throw pillow, seems pretty cozy to me. 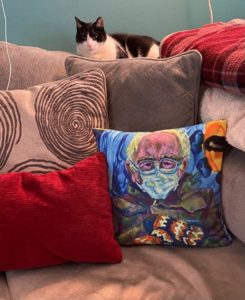 Here’s to February and the continued rise of chillness I feel like I’m seeing around the U.S., it’s slow and hard to pick up on, but I think it’s there!